For the Love of Luna!

Luna was born late in the morning, in our foaling shed and under the crescent moon.  I had to name him Luna.  I know it is a girls name, but Luna is such a sensitive new age kind of horse, it works.  He grew up a kind and gentle and an old soul; though not entirely humble, more, gregarious.  If he was human he would be Antonio Banderas. 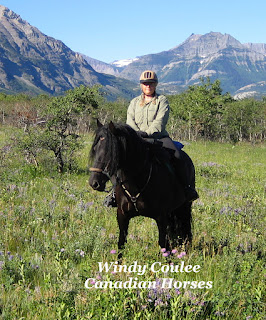 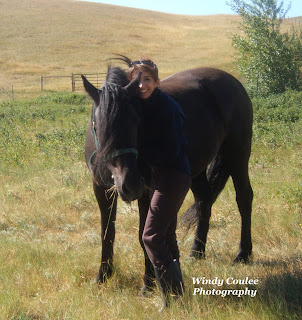 If we are to encourage fun, happiness, success in our Canadian horse industry, we need to raise and train more horses like Luna.  He takes care of his rider.  His first ride was a lunge in the arena at age 3, he already knew voice commands; walk, trot, canter and whoa. I lunged him, my friend Jody got on him.  No big deal.  Nothing much was a big deal for Luna, he just loves being around people and still was a horse at the same time.  He really shone when we started hosting Wwoof Guests.  Flo, also an avid photographer, rode much of the time sideways and backwards taking pictures.  I never remember ever seeing him, um, actually riding.  He was using Luna as a moving seat in the backcountry, and a moving pedistal to set up his camera for some incredible photos.  Luna loved it. 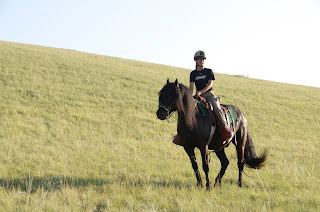 Isabella was the next person who became a Luna fan.  She had always dreamed of riding a horse, and riding one into the backcountry of the Albertan Wilderness.  Luna was the one to take her.  She had never really ridden a horse before, but was unafraid and athletic, not to mention very enthusiastic. We practised a few times at the farm, then rode a 26 km loop in Waterton Lakes National Park, saw a bear and some incredible scenery.  After the ride, at the trailer, she teared up and hugged Luna . . . an experience of a lifetime.

Many people have ridden and enjoyed their time with Luna in the backcountry.  He is a horse that is not going to harm you, will stop and turn around if things are "going pear shaped"  and usually has something comical to do in front of the camera! Including ingesting Mark and Christina's green wristband, the item of photographs from their world tour.  He ate it (it did after all look like hay) and then we found it in his corral a day or so later.  It did continue on its world journey, a little um, chewed up and having taken the same journey a Tilly hat once did through an elephant. 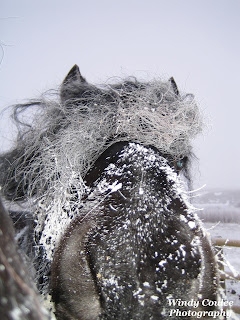 Luna is the go to horse to role model for younger horses learning the ropes of riding and the guest horse who will take care of our visitors. 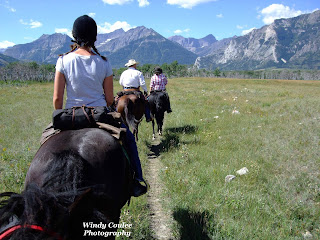 This week in March 2017, we are honoured to announce that Windy Coulee Dawn Luna, my heart horse, has a guest appearance on Heartland.  Thank you to all who asked the producers to create an episode with a Canadian. 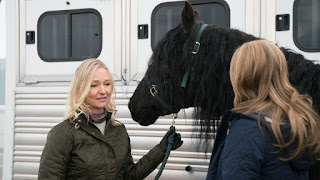 Luna, we love you.  Thank you for being you!
Posted by Windy Coulee Canadian Horses at 17:08 No comments:

Flicka arrived at Windy Coulee in November 2014. She has a long journey of recovery ahead. She was fit and healthy in 2011 this is her story. If you would like to read the whole story, scroll down to post number 1,  November 2014.

Some sayings suggest a new door always opens when one closes.  In Flicka’s Journey, numerous doors have been opened and the journey our pony took was through all sorts of doors!  By traveling through Flicka reached health, soundness and began a new career as a riding pony.  Sometimes you want to go to the closest door, but decide that maybe being patient and reaching for a more distant door is the right thing to do.  Perhaps a more appropriate term to use would be gate . . . as in a gate to a new corral at a new home with a new family. 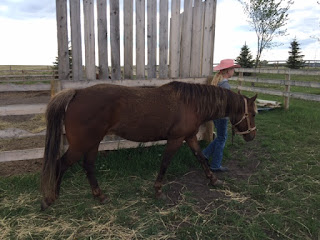 For Flicka, waiting a winter to find that perfect family was worth it.  As our sweet pony continued to gain muscle and health, her search for a new home began with earnest.  And with grateful thanks going to Equine Now, the perfect family found Flicka!  I had decided to describe a profile of the perfect family on Flicka’s Facebook page a few weeks earlier . . . what is so amazing is that after waiting patiently, a family just like that emailed, asked questions, spoke on the phone, made arrangements to visit, arrived with helmets and experience with ground work and rode Flicka beautifully! 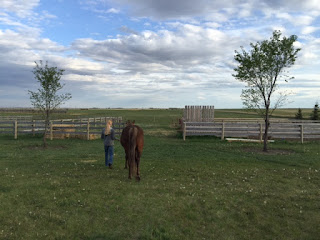 Handing the lead rope over to the girls and Mum was so satisfying . . . I know our little pony with so much potential will do what she is great at, and will support a whole family of horse enthusiasts as they reach for their dreams for many years to come. 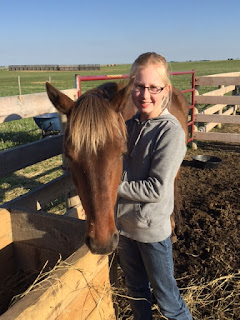 Thank you Laura, Dan and your four lovely children!  Have fun.

Flicka arrived at Windy Coulee in November 2014. It has been almost a year of rehabilitation and it is so nice to report on her success!  Flicka had a year long journey of recovery and there is still a journey of learning and developing as a trained pony ahead.  Her story is a good one; so good to share good news stories.  Please feel invited to scroll down to post number 1 and check out her story. 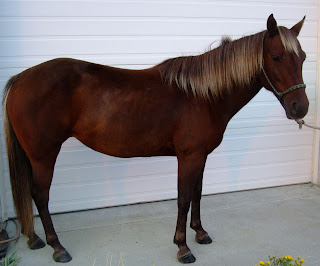 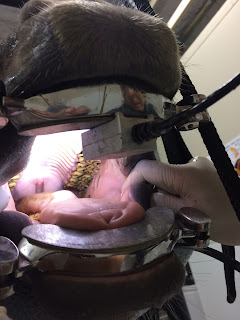 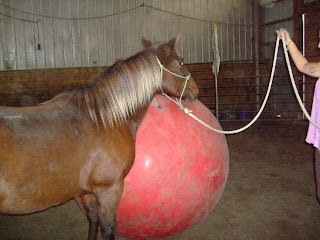 Flicka at the obstacle practice in October . . . nothing  phases her! 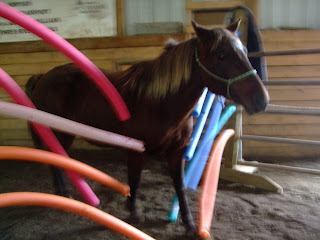 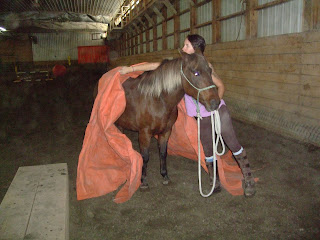 Posted by Windy Coulee Canadian Horses at 18:11 No comments:

Now that Flicka's feet are back to normal and she has been professionally started by Bob our trainer, it is time to give her confidence and experience riding and traveling into the mountains. 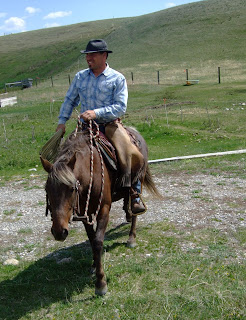 Bob gave Flicka a superb start, 15 rides in the ring and around the farm. He taught her to move her feet if she needed too, and that carrying a rider is a good thing! 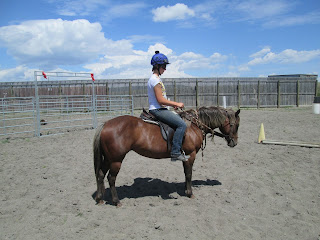 Sarah, our volunteer from England, has taken over riding Flicka.  She is confident riding around the farm; taking time with gates, riding with different horses each time and trotting and cantering across the grassland! 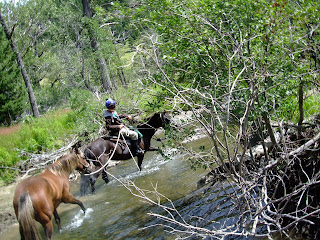 On Sunday, Flicka joined us on a 5 hour trail ride in Bob Creek Wildland!  She has been gaining condition and we thought ponying her with 6 other horses would be a nice change.  Flicka kept up with no trouble, and as much as she was a little cautious with the horses she did not already know, she seemed to enjoy the distraction of a few steep hills, creek crossings and logs. 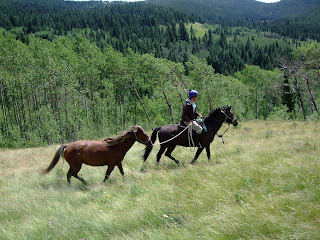 I can not emphasize enough how important it is spending consistent time doing a good variety of regular things with a horse new to riding.  It builds their confidence and helps them learn that a new experience is a good experience, and lets them practice a variety of difference tasks in a calm, low pressure way.  This is what makes a riding or driving horse . . . the time spent after the trainer, after the starting, the time spent enjoying new experiences!  What that does is train their mind so they can become that confident, safe, reliable horse (or pony) we all want!  Flicka is on her way . . .

Her feet are almost completely regrown at the correct angle, without the separation.  She is a few hundred pounds less, a nice slim neck and is so happy to be going to work.

14. Flicka's Journey - The Process of Healing

Posted by Windy Coulee Canadian Horses at 11:57 No comments:

This just in, Flicka has started riding!  Her feet are coming along nicely and the time to get started on this project is now.  Flicka is now off the green grass as well, so needs excersize.  Bob has been working with the new horses at Windy Coulee the last month and has made super progress with all of them.  Flicka of course responded very well to the ground work and took to the saddle with ease; she was, after all, a well trained pack horse!  Then, after some careful consideration and watching her reactions to ground work, Bob just hopped on!  I was surprised to see them riding around the ring when I went out to the barnyard to watch the progress!

Posted by Windy Coulee Canadian Horses at 11:39 No comments: